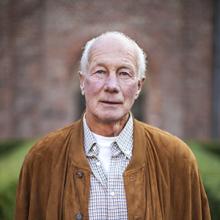 Back in 1997 as I was riding my bike, I fell and fractured my hip – I was only 57 years old at the time. The following day I was operated on and the fracture consequently healed normally. After recuperating I continued to practice sports and, fortunately, I have not experienced any serious falls or fractures since then.

In 2011 I went to see my general practitioner (GP) for a tickly cough and she sent me to a radiologist to see if there was something wrong with my lungs. The radiologist reported that my lungs were perfectly fine, but he had spotted osteoporosis in two vertebrae. I went back to my GP with the report and she said that she was astonished that I had osteoporosis as I had no evident risk factors. She said "you never smoked, you don’t drink alcohol, you were never treated with corticosteroids, you practice sports almost every day and you are often outside. There is either something wrong with the x-ray image or you have osteoporosis - we’ll have to further investigate".

She sent me to St Lucas Hospital for a bone density scan and it was confirmed that indeed I had osteoporosis. I went back to the GP with the report and she then sent me to a special unit for osteoporosis at the Ghent University Hospital to find the root of the problem. Once there, I was seen by two specialists, Dr Kaufman and Dr Goemaere.

After all kinds of tests, they reconfirmed that I had osteoporosis and they tried to find out why, as neither of my parents had had a fracture. They concluded that my osteoporosis was due to malfunctioning of the parathyroid gland and low levels of male hormones. Treatment was started with alendronate every two weeks and injections with systanol every two weeks. Since treatment began, follow-up tests have shown that the osteoporosis is now stable.

I have decided that I will no longer take risks. I used to go skiing two or three times a year, but after the diagnosis was confirmed, I decided that I no longer wanted to place myself at risk of a fall.

If I fracture my spine, I will be in a wheelchair for the rest of my life and I will no longer be able to practice any sports whatsoever.

With time and due to the risk of falls, I started to play tennis less frequently and stopped playing altogether last winter. Two years ago I started playing golf as it is less aggressive and because you are outdoors a lot. I also cycle, but no longer in groups, as there is a greater risk of falls.