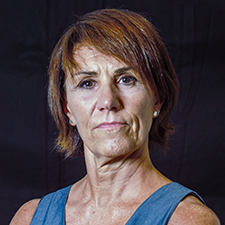 Induced menopause and treatments with aromatase inhibitors for breast cancer have compromised Silvia’s bones. She discovered this by paying a high price - the fracture of two vertebrae and fear of not being able to regain the ability to walk. But today, thanks to antiresorptive treatment, she is doing well again.

“It was hard, but I'll get back to skiing”

Silvia, 58, has spent her life between Italy and Belgium. She has two children, a job and an immense passion for sport. But if you ask her to describe herself, the first thing she talks about is skiing. In her own words, "Skiing has always been more than a sport to me. Skiing off the slopes, on fresh snow, helps me think about my priorities and find solutions to my problems. It's something that profoundly cheers me up”.

In 2003, when she was 43, the gynecologist found a small lump in her breast. The diagnosis of cancer soon followed, along with what she called the "complete package" - mastectomy, chemotherapy and hormone therapy with aromatase inhibitors, in order to reduce the chances of recurrence. As a result of the treatments, at the age of 44, Silvia had entered menopause.

Skipping forward to 2016, thirteen years had passed since the diagnosis. Silvia had returned to regular life. It was a cloudless day in January when she decided to face an off-piste descent and was unknowingly about to receive a bad surprise. A slight fall on the snow caused her to fracture two vertebrae and a CBM revealed an osteoporotic fracture.

"I will never forget what the doctor who had advised me to take the exam said - that after five years of aromatase inhibitors, the bones can be compromised and that it should have been advised to have checkups. I will never forget the anger and frustration. The hardest thing wasn’t the fact that I had to spend three months in bed, but actually regaining the confidence to start walking again. It's a terrible feeling to be afraid of doing the simplest things. I haven't skied since."

After this revelation, Silvia decided to go a rheumatology centre, where she began taking specific antiresorptive treatment for her bones, along with calcium and vitamin D. Two years later, the latest CBM showed a significant reduction of bone fragility, so much so that Silvia is no longer in excessive danger of fractures.

On March 3rd and 4th I intend to revive the skis for the night skiing from Theodul to Cervinia. This will be my victory, and up next, Kilimanjaro.