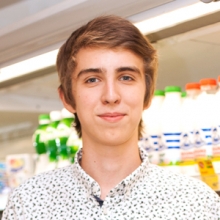 My story began in 2009, when I was 10 years old. At the age of  8, I began to grow very fast - almost 10 cm every year. My first fracture of the right tibia (shinbone) occurred at the age of 10 when, as usual, I  jumped down four steps on the school staircase. I felt a strong pain in my leg. I could not stand up, and my ankle began to swell up. My Dad picked me up at school and took me to the hospital. In the emergency room I had an X-ray made and my leg was put into a cast.

The doctor told my father that the bones in the picture looked transparent and I needed to eat more foods rich in calcium and vitamin D.

I had to spend the first two weeks at home, as any movement caused a sharp pain. I used steel crutches to get around. I was glad that it was not necessary to go to school, and I could spend  all day playing computer games and eating  my favorite chips. My mother, who is a doctor, kept telling my grandmother not to buy me ‘bad’ foods. My mother was sure that my bones, because of the rapid growth, would not have time to harden and these ‘bad’ products were preventing the proper absorption of calcium. She insisted that I should drink more milk, and eat other calcium-rich foods like yogurt and cottage cheese. Two weeks later, I returned to school.  For more than a month I had to get around on crutches. I have to say, it's not very comfortable! I had milk and cheese every day to help my bones heal until I could finally remove the cast.

As soon as the day of my ‘liberation’ came, I promptly forgot about the dairy products and began to eat chips and drink Coke again. Not two months later, I suffered another fracture, this time I broke my foot when I kicked an icy snowball.  So it was another round of crutches, computer games and boredom! And it got worse – I ended up having four fractures that year.

This series of fractures puzzled the whole family. My mother got involved and studied issues related to the prevention and treatment of osteoporosis. She lectured us about the benefits of dairy products which are so important for adolescents. We learned that one should have a daily intake of at least 1000 mg of calcium, 400 IU of vitamin D and least 2 g protein per 1 kg of body weight. I learned that foods such as cheese and sesame seeds are very rich in calcium. And that certain fish, as well as cod liver oil, contain a lot of vitamin D, which is needed for calcium absorption. The bones’ enemies are salty foods – as it has been shown that sodium can hinder calcium absorption into the bones.

With our mother’s help, my sister and I researched for a school science project which we called ‘Why People Have Fractures’.

It turned out that one third of all children at our school have had fractures. They eat practically no dairy products, and they don’t spend enough time outdoors.

We presented our project at the school science fair, and drew attention to the problems of calcium and vitamin D deficiency and low levels of physical activity. My mom then volunteered to start the project ‘School of Health’ and she now conducts free classes for anyone who cares about their bone health.

As a family, we decided to change our lives – and we’ve been successful! Today, our family of four and two cats drinks at least 4 liters of milk per day.  For breakfast, we usually eat cheese, milk porridge, and cottage cheese. In addition to changing our diet, we got involved in sports activities. My mother is a Nordic walking instructor, conducting Nordic walking workshops for the elderly and active young people. We also help out when we can.

Now I'm 20, and I’m 192 cm (6’ 3’’) tall. I have not had a single fracture since that terrible year. I am sharing my story because I think it will be helpful for other young people, their parents and grandparents. Dairy products are tasty and healthy. My message to all: Begin to take care of your bones in your childhood!