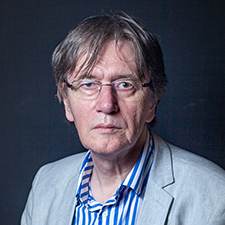 Sándor started smoking at the age of 18. Smoking a pack and a half of cigarettes a day was part of his image as a cool, handsome young student in 1980s Hungary. Cigarettes, accompanied by five to eight coffees per day, during never-ending literary discussions were the norm. Whether in relaxed conversations or passionate debates, he was never seen without a cigarette in his hand. After the revolutionary changes in Hungary, the coffee-cigarette combo was complemented with a daily bottle of Coca-Cola. And of course, very much like the famous Churchill, Sándor also firmly believed in the merits and sustainability of a "no sports" attitude.

Refusing to acknowledge the potential outcome of such an unhealthy lifestyle, Sándor slowly pushed his health towards the red zone of osteoporosis and sarcopenia. Now 60 years old, he’s an established writer and the owner of a renowned publishing company in Budapest. The young artsy writer has transformed into a middle-aged man with a slight stoop and poor bone and muscle health. In fact, after being urged to have a DXA scan by a doctor friend, Sándor has discovered that he has developed osteoporosis at the hip (Hip T-score: upper neck 2,8; neck 3,1; Ward’s triangle 3,7;  Total 1,7).

A surprise? Not really - smoking is a major risk factor for osteoporosis, and when coupled with a sedentary lifestyle, is a sure pathway to weak bones and muscles.

Sándor has been incredibly fortunate so far. Despite having osteoporosis, he has not yet broken a bone. Fractures caused by osteoporosis can alter a person’s life, leading to intense pain, immobility and potentially long-term disability. For many people with spinal fractures, sitting for any length of time is painful. What a nightmare that would be, and especially for a writer!

There’s only one sensible course of action, dear Sándor: take your doctor’s advice by changing your lifestyle and getting the right therapy to protect your bones from further damage.