Osteoporosis remains a vastly underdiagnosed and undertreated disease, despite the enormous toll it takes on the world’s older populations and healthcare systems worldwide. Even after patients suffer a broken bone due to osteoporosis, it is estimated that around 80% are not diagnosed and treated to prevent recurring fractures. This is why World Osteoporosis Day, marked every year on October 20th, is a vitally important occasion to drive much-needed awareness for bone health and the prevention, diagnosis, and treatment of osteoporosis and fragility fractures.

It was tremendously gratifying to see the fantastic outreach generated by World Osteoporosis Day 2022 – with the IOF network and other healthcare advocates reaching out to the public, patients, and health authorities in a concerted global effort to urge people of all ages to ‘Step up for bone health’.

As it does every year, IOF spearheaded the campaign with a World Osteoporosis Day website, a marketing toolkit, and new multilanguage resources that are freely available and widely used by the IOF network within their national campaigns. The WOD website attracted more than 112’000 visitors and the resources were downloaded more than 16,500 times by the end of October 2022 – a more than 60% increase from 2021.

IOF’s more than 300 member societies, Fracture Liaison Services, clinics, and health authorities around the world used the occasion to drive awareness and action on behalf of bone health and osteoporosis prevention. Many made use of the new and past IOF posters and social media assets within their campaigns. To date, the WOD website has posted more than 225 events and campaigns in 50 countries, which is likely a very conservative number considering that many events are not recorded on the website. Many national societies can be commended for their extensive and impactful campaigns including  (to name but a few) in Denmark, Finland,​​​​​​ Japan, Russia, UK and the United States.

IOF was proud to take part in FIRMO Roundtable in Italy on October 20th with participation by IOF Treasurer and Executive Committee member Professor René Rizzoli. In Latin America, several exciting events were held. For example, IOF held events in Panama and Costa Rica to disseminate the findings of the IOF Calcium Survey. In Panama, the media event in collaboration with FOSEMO generated widespread press coverage, while in Costa Rica an event for the general public ‘Cuida Tu Salud’ was held by ACCYMO, as a focal point of a month-long media campaign. We were also pleased to see the active outreach in the Asia-Pacific, a region which over the next two decades may see a staggering 319 million people aged 50 years and over at high risk of osteoporotic fracture (read APCO WOD blog). India and Malaysia stand out with numerous events by local hospitals and clinics. 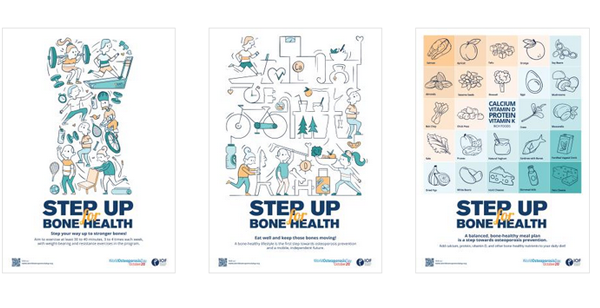 New resources for the patient and public prepared by IOF this year included three poster designs available in 17 languages, and related social media banners. The highly popular ‘5 steps to bone health’ infographic, a new brochure on exercise and osteoporosis, as well as a leaflet called ‘How to eat well after breaking a bone due to osteoporosis’ were launched. The importance of bone-healthy nutrition was also marked by the launch of the new IOF Bone-Healthy Recipes section (which will be further developed in the coming year), together with a new fact sheet listing calcium-rich foods.

The three IOF press releases issued for WOD had a potential outreach to more than 2.2 billion people. The first release, issued on October 18th, 2022 focused on the importance of secondary fracture prevention by highlighting the 10th-year anniversary of IOF’s landmark Capture the Fracture® program. A second release on October 19th announced the launch of the SCOPE 2021 Map, putting a spotlight on the burden of osteoporosis in Europe. On WOD itself, IOF issued a global press release entitled On World Osteoporosis Day, take five steps to better bone health which was issued in 9 languages across key media outlets in the Asia Pacific, Europe, Latin America, and North America.

One highlight of the extensive WOD social media campaign from September to November was the new Step up for Bone Health Quiz (also in Spanish), which was completed by more than 1000 people. Eighty percent of those who completed the quiz indicated that they were inspired to pay more attention to a bone-healthy lifestyle, and more than 60% indicated that they would ask their doctor for a bone health check-up. Altogether IOF issued 135 social media posts across seven IOF channels, with outreach to more than 140,000 people.

IOF has also been delighted to see that more health authorities and hospitals than ever before are marking World Osteoporosis Day through their social media and other communication channels. In one example, the Italian Ministry of Health used IOF social media assets to post to more than 3.27 K Twitter followers, urging them to: ‘Fai un passo avanti per la salute delle ossa’.

“What a phenomenal World Osteoporosis Day it has been. IOF’s impactful ‘Step Up For Bone Health’ campaign messages and resources were shared worldwide through our global network – in fact #WorldOsteoporosisDay took social media by storm! I'd like to congratulate my team at IOF and all our member societies for the fantastic and unprecedented outreach. I feel that this campaign has successfully spoken to all age groups – highlighting the importance of bone-healthy lifestyle and risk awareness for individuals of all ages, as well as the urgent need for secondary prevention strategies at the policy level.”

IOF warmly thanks all the WOD partners whose contributions have supported our efforts for this year’s campaign: Sunsweet, Amgen, Zuellig Pharma, Abbott, Pharmanovia, and Theramex.

Visit our campaign website to view events and resources: www.worldosteoporosisday.org