Samantha Cristoforetti returned from 170 days aboard the International Space Station for ESA’s Mission Minerva, on the 14th of October 2022, just in time for World Osteoporosis Day. We’d now like to take the opportunity to express our great appreciation to Samantha and the ESA team for their wonderful collaboration and tremendous support of the campaign. The campaign has been instrumental in amplifying IOF’s messages about the importance of exercise and a bone-healthy lifestyle for osteoporosis prevention to a new and younger global audience. Importantly, the impactful messages and videos will live on and continue to be shared through the IOF website and YouTube channels.

To date, the campaign has reached more than 3 million people and videos have been viewed close to 2 million times - and counting! The #LiftOffForBoneHealth webpage, which has already been viewed more than 13,600 times, is available in 10 languages, including French, Farsi, German, Greek, Hebrew, Italian, Spanish, Portuguese and Russian.

Wearing an IOF ‘LIFT-PUSH-BUILD strong bones to prevent osteoporosis’ polo shirt, Samantha Cristoforetti pre-recorded seven videos on behalf of IOF – in three languages no less! Each video focused on different topics, urging young people to practice load-bearing exercise and to maintain a healthy balanced diet with enough vitamin D. The videos also raised awareness of osteoporosis risk factors,  the need for exercise to counteract the accelerated bone loss that occurs at menopause and the important role of physiotherapists in providing targeted exercise programs for rehabilitation.

While on her mission in Space, Samantha recorded further videos which she shared with her million followers on Twitter and TikTok - including ‘weightlifting in weightlessness’, which had more than 911 K views. Likewise, IOF and its member societies disseminated the campaign videos on their respective channels. 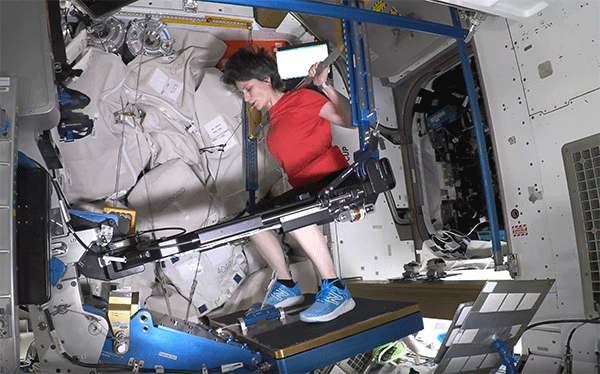 “As we welcome ESA Astronaut Samantha Cristoforetti back to Earth, I’d like to thank her personally for her time and support, and acknowledge ESA’s absolutely fantastic collaboration on the #LiftOffForBoneHealth campaign. It is vitally important that younger people, and especially young women, take early steps for osteoporosis prevention through exercise and good nutrition. As a role model for young women with a large global social media following, Samantha’s video messages have truly helped to spread awareness of the importance of strong bones and muscles."

“THANK YOU, ESA and Samantha Cristoforetti for a successful mission accomplished!”