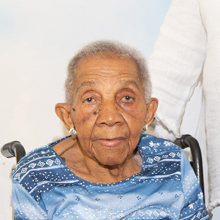 Like many people in her family, Augustine Shorten, a proud African American woman from Lake Charles, Louisiana, has been blessed with a long life. She just turned 97.

Also like many people in her family, Augustine has bone and joint problems. Her gnarled right knee shows the signs of osteoarthritis, which she has endured for decades of sometimes-debilitating pain.

“I think it had to be from my grandfather’s side because he had the same issues that my mother had with the knee caving in,” says Augustine’s daughter and caregiver, Linda Shorten, 65. Linda has had both of her knees surgically replaced. “We knew it was from him, and then we watched the same thing happen to her, and all of us have had some kind of knee problems. All of us.”

Augustine also has suffered from broken bones caused by osteoporosis.

“Many people believe that the Black community does not have to worry about bone health issues,” says Nicole Wright, 38, Augustine’s granddaughter, who happens to study osteoporosis epidemiology and racial disparities in osteoporosis management and outcomes. “The skeletal system is an organ that needs to be cared for just like any other organ; when it is not, problems can arise in any racial or ethnic group.”

Augustine did not have an easy life. She grew up working on the family farm, raised five children by herself, and worked two jobs as a house cleaner and a school janitor. She did all this while facing the constant stresses of living and raising a family in the racially segregated American South.

In her 50s, Augustine became sick with gallbladder problems and lost weight, which made her spine curvature from scoliosis more noticeable, says Linda. In her 70s, she fell and injured her knee. “You could see her declining from there,” Linda says. During this time, Linda said Augustine was becoming hunched over, and a hump showed up in her back.

Looking back, Nicole said this was a classic sign of osteoporosis. “They call that the dowager’s hump, caused by compression fractures in the upper spine,” Nicole says.

Nicole said that while growing up, she always thought “bones were cool,” probably because of her family’s regular interactions with orthopedic surgeons. “But I hated watching my grandma shrink away like the classic picture of the woman with osteoporosis – where she starts to shrink, hump over, and ends up an old frail lady. You could have put my grandma’s face on that picture.”

So when it became time for Nicole to start thinking of post undergrad life, her grandmother’s experience inspired her to pursue a PhD in epidemiology focusing on musculoskeletal aging and osteoporosis. Now an Associate Professor in the Department of Epidemiology of the School of Public Health at the University of Alabama at Birmingham, Nicole has 10 years’ research experience in the field.

Nicole said she knew her grandmother was not the picture of normal aging. Early on in her career, however, she was surprised that it was happening in her Black family, as she too had misconceptions about osteoporosis in the Black community. “I thought, I have to do more research on this,’” Nicole says.

Research shows that Black women are less likely than White women to be prescribed osteoporosis medicine after a fracture and less likely to be screened for osteoporosis. Nicole’s research describes that although Black people in the United States have lower risk of fragility fractures than White people, they have significantly worse outcomes after fracture, specifically in terms of death, debility (long-term nursing home stays), and destitution (Medicaid dependency).

“These type of disparities in health outcomes further elucidate the inequities in our society,” Nicole says. “Describing them is the first step, and identifying the cause is the second. If these inequities can be eliminated and/or the magnitude reduced through changes at multiple levels (patient, provider, systems), then we have try for a healthier and more equitable society.”

Luckily, Augustine’s doctor prescribed her Fosamax, but she wasn’t able to tolerate the drug, and her treatment ended. “I don’t think the doctors knew that much about osteoporosis,” Linda says.

At that time, there weren’t a lot of treatment options, says Nicole, and she thought her grandmother could have benefited from advances in osteoporosis treatment that have become available in recent decades. “If she was younger, they may have tried some of these treatments, but I think there was probably some naivete on the clinician side as well as the family side of not knowing exactly what was going on.”

We know that medication is only one part of a healthy bone program. Other elements include movement and nutrition. Augustine led a very active life. “It was not until five years ago that she moved in with me,” Linda says. She was washing down her house, and cutting her grass every week. She was active, but she was in pain.” As time went on, Augustine’s movement became limited. “She was walking with a cane, and then she went from the cane to the walker, and now she’s just totally in the wheelchair.”

“This has had a significant impact on the bone density in her legs,” says Nicole. “I’m very afraid of her falling and breaking a hip or leg and not recovering.”

With respect to nutrition, Linda says Augustine is lactose-intolerant, like 75% of Black Americans.

“My grandma was a strong, active lady, so I guess the lack of calcium along with genetic predisposition probably accounted for her bone health problems,” Nicole says; however, “she just didn’t have the ability to think about bone health because she was providing for her family. There was no luxury of wellness visits earlier in life, and lack of knowledge probably contributed to not being as proactive about bone health when services were covered by Medicare.”

Linda says her doctors have been vigilant about her bone health because of her mother’s history of osteoporosis. Her DXA bone mineral density tests have looked good, she says. “I’m taking calcium, I’m taking vitamin D, and I take my multivitamin,” Linda says.

Nicole has been vigilant about making sure her mother and her other aunt stay on top of their bone health so history does not repeat itself. “There are so many bad things associated with fractures from osteoporosis, which no one should endure. I do not want anyone’s grandma to have to suffer like my grandma, so we all need to educate ourselves about bones and how to take care of them all throughout the lifespan.”